Teens and music festivals – Is it ever a good mix?

What is the obsession with teenagers and music festivals? There seems to be one every weekend during the summer and teenagers everywhere think nothing of paying hundreds of pounds for three days in a tent, possibly not even bothering to move to the stage to see a band, which they may or may not like.

They used to be a rarity. You would save to go to the one festival where the line-up included at least a couple of your favourite bands. It seems to be only in the last five years or so that we have all gone festival crazy. Don’t get me wrong. I think festivals are fantastic and I love live music but what I hate is the behaviour around the ‘young’ festivals. Drugs seem to be the norm, everyone spends most of their time thinking of ways to smuggle alcohol on site, and no one seems to give two hoots about the music.

I know that it is now seen as a teenager’s rite of passage into adult life, and every generation has their thing, but it is a bit of a scary one for parents.

Teens start going around the age of 15 years, and for many, it is the first time they have had to look after themselves away from home. I worry that they may feel pressured to smoke, drink or take drugs when they may not have even considered it before and if they already do these things and it goes wrong, then it is unlikely to be spotted in the chaos.

So, teenagers and music festivals – isn’t that just a massive house party where all the parents are away? Is that ever a good idea? Am I the only one who worries about their safety at music festivals? Do you allow your teenagers to go and at what age? If not how do you stop making them feel like the odd ones out?

My older daughter went to Reading Festival when she was sixteen. Even she said she was shocked by the amount of bad behaviour, which included throwing faeces over the crowd and tents. But she loved it and now my youngest daughter, just turned 17, is about to head off to Reading Festival in a few weeks’ time.

Your views, reassurance or advice would be much appreciated!

Teenage binge drinking – Is it going out of fashion?

Is Instagram Safe? Be aware of the darker side of social media 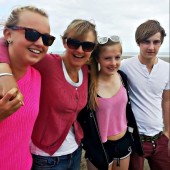 Starting periods – making it easier for you and your daughter

Book Tokens are Alive and Kicking